The lead investigator in the Sh3.5 billion Anglo leasing case has said  Sound Day Corporation, was a ghost  company.

Sound Day Corporation was the entity contracted to supply police security equipment to the Kenyan
state.

Ignatius Wekesa on Friday told anti-corruption magistrate Felix  Kombo that there was a conspiracy between the supplier, Office of the  President  and  the  Treasury  right   from initiation of the project in 2002.

During the course of their investigations, Wekesa said even former Permanent secretaries never acknowledged the existence of Sound Day.

The witness while being cross-examined by Lawyer Edward Oonge said the government dealt with the company from 1992 but  the  con- tracts were irregular.

Oonge  is  representing  former   Treasury PS Joseph Magari who is  an accused person in the case In his evidence given in January
last year, Wekesa mentioned to the  court that they had asked the British  government for assistance regarding  the directorship of Sound Day and  whether it was a valid corporation  in the UK.

Information sought revealed that  Sound  Day  was  incorporated  on   September 21, 1989 at the British  Virgin Islands and that the Kamani  family were the directors of the firm  having taken over from one Collins  Foster in 1990.

London’s PSJ Alexander and company chartered accountants are the ones who provided most of the documentation as far as Sound Day Corporation is concerned.  Wekesa is the  last  prosecution   witness.

Sound Day Corporation are accused of committing an economic  crime. The accused persons are on trial  for  conspiring  to  defraud  the   government  billions  of  shillings   through a dubious financing agreement.

It is alleged that between October  30, 2003 and April 14, 2004 in Nairobi, they conspired with others to  engage in a scheme to defraud the  government of Sh3.5 billion. 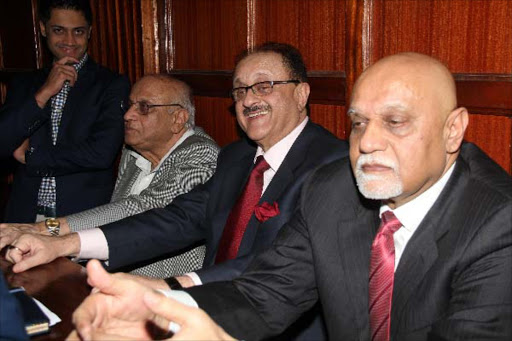 This  was  through  a  suppliers  credit contract agreement for the modernization of the Police Security  Equipment and Accessories Project.

During Friday’s hearing, it also  came  out  that  there  was  a  Cabinet memo relating to the security  equipment