Webuye police have arrested two IEBC officials in a rush to Tuesday polls. The two were nabbed in a hotel in Webuye in a secret meeting with aspirants.

According to a reliable source,Webuye East IEBC office has assured members of the public that they will announce their names as action will be taken against them for violation of office.

Sources have told the writer that Ford Kenya candidate Martin Wanyonyi is allegedly the one who had convened the meeting within Maraka ward . 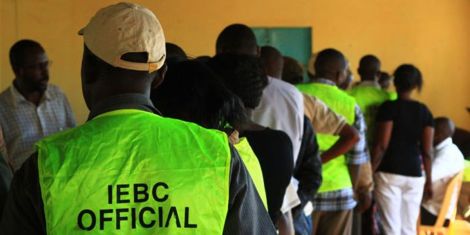 In other news another meeting in a hotel between IEBC officials and Webuye West MP Dan Wanyama botched after the public got a tip off.

The area MP sneaked out of the hotel after the public barricaded the gate.

The Downhill Hotel management confirmed that there was an altercation in the Hotel yesterday evening.

DAPK parliamentary aspirants John Bunyasi and UDPs Kelly Walubengo have raised a red flag questioning the credibility of the process.

The two are accusing the area MP of colluding with IEBC officials to alter with the credibility of the process.

“ We are at tabs . All meetings between the IEBC officials and the aspirants will be unveiled in due course. We have the evidence ready and filled.” Said Kelly Walubengo.

The two are expected to hold a press conference today at Chebosi tallying centre.