Kiharu Member of Parliament, Ndindi Nyoro is currently the largest individual shareholder at Kenya Power and Lighting Company, according to the latest filings by the Capital Markets Authority (CMA).

The move pushed Nyoro’s stake in the company from 12th position to third- behind government and bank-owned shares. 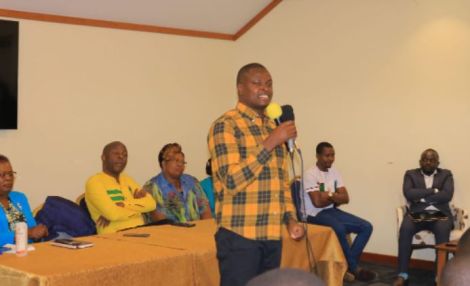 According to data from the Nairobi Stock Exchange, a share of Kenya Power retails at Ksh1.60. The legislator, who will be serving his second term as Kiharu MP, revealed that his desire in investing at the state-owned power utility was fueled by its immense revenues and assets.

“The company is valued at less than 1 per cent of its asset value. I am buying KPLC shares because I know we can fix issues of electricity when allowed to make decisions. It has a lot of sleeping capital which can be used to assist more homes.”

The MP noted that the asset value presents a great opportunity for any buyer seeking to enjoin himself in the venture.

Currently, the National Treasury is the largest shareholder with a total of 978,492,034 by the end of June 2022. This reflected an increment of 850,339 from last year’s evaluation.

Treasury is followed by Standard Chartered Residual nominees who have a total stake worth 32,518,589.

The individual category list is rounded up by Shah, Mahendra Kumar Khetshi who got 11,024,900.

Nyoro, who is a close confidant of the president-elect, William Ruto, prides himself as the voice for the common mwananchi.

The lawmaker’s wealth however ranks him among the wealthiest politicians in the country.

Among the properties include Afrisec Telecoms, Investax Capital, and Telesec Africa. The companies have a valuation that totals Ksh300 million with an annual turnover of Ksh50 million.

He has also stretched his wings into other sectors including, construction, civil works, stock brokerage, drilling, communication and water engineering.

Tweet
Share
Share
Pin
0 Shares
Tags: 116 291 400 shares by the end of June 2022.  The move pushed Nyoro's stake in the company from 12th position to third- behind government and bank-owned shares. 800 shares at the end of June 2021 to 27 according to the latest filings by the Capital Markets Authority (CMA). Nyoro tripled his shares from 9 Kiharu Member of Parliament Ndindi Nyoro is currently the largest individual shareholder at Kenya Power and Lighting Company